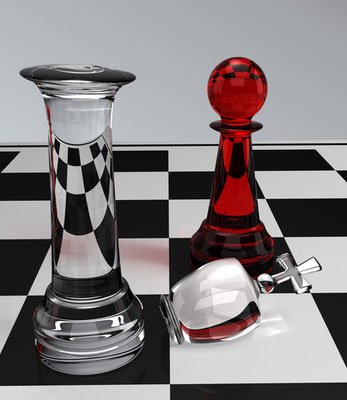 Executive team participation is a bit of a chess game.  If you saw the first Harry Potter movie you know that sometimes chess can be dangerous to one’s health!

The Chess Board picture to the right shows a beheaded King, and the one below is called “King under Fire.”

I chose the “King under Fire” picture for the Team Killer list for a reason. It takes conscious effort and team_killers courage to build a high performing team. Interestingly, I have seen — and probably so have you — issues like these team killers ignored by top management until they fester into real trouble — bottom line trouble. 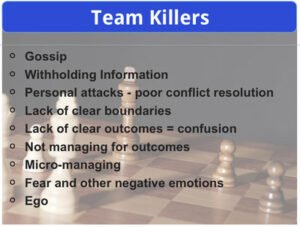 nvisible cloak that protected him from being seen as naked. They were lazy or didn’t want to make his clothes. No one mentioned his nakedness, not wanting to speak truth to the king, until some child yelled, “He’s naked!”

Pat Lencioni (author of the 5 Dysfunctions of a Team and other leadership books) shared a story about withholding information in his most recent Point of View.

“After a few mergers and acquisitions, the CEO of a large company had two direct reports on his leadership team with the same title. Neither was sure which of them was responsible for what their title indicated, though one of those executives was feeling particularly left out of the decision-making that he had been accustomed to before. For weeks he tried to schedule a meeting with the CEO – his boss – to clarify the situation, but he was turned away by the executive assistant again and again. Finally, he found himself sitting next to the CEO on a flight, determined, if not a little wary, of finally learning the fate of his career.

“What happened is almost too strange to believe, but I promise I’m not making it up. The CEO put on headphones, closed his eyes, and spent the entire trip in silence, all to avoid an uncomfortable conversation with one of his direct reports, who eventually just left the organization.”

Pat’s point is that some CEOs develop a sense of entitlement about not having to deal with conflict, as if their position should get them out of anything distasteful.

On the other side of that pathetic example of leadership is one shared by Dr. Marilyn Jacobesn in her thought leaders blog, “Using Power to Empower.” This is the stoy of Ann Yee-Kono, Executive Vice President of Investment Operations and Technology with Ares Management, who gives away power to get power; “…it is evident that what is sought is not power or influence but more interesting and challenging work in the arena where decisions with the biggest risks and rewards are made.” 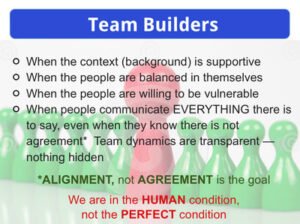 Whatever it is in that moment, the context is defining. I do not mean it is an influence, I mean context determines outcomes. If you intend to be right, you will believe you are right regardless of another’s views. Whatever context you bring to the conversation will still be true after the conversation UNLESS and UNTIL you are willing to be wrong, willing to be swayed, willing to align even if you do not agree. For your context to change you have to be willing to be contributed to, you have to take coaching, you have to give up your position. Stay with me here, because this is important. If your context is already that you come to a conversation open and reflective, ready to be influenced at the drop of a hat perhaps you need to develop more backbone, which is the other side of that realm because perhaps you do NOT bring sufficient context. Where is the balance that is JUST RIGHT?

One of the reasons leaders may develop an attitude of avoidance regarding what I call the squishy people stuff is because people are complex. If you are conflict-averse, or you simply find dealing with people to be emotionally trying, avoidance is a strategy. It is also a trap. It leaves people unable to speak their truth. Or unable to contribute to the organization. Or unable to find satisfaction in their work and work relationships. It is disabling to have leaders abdicate their relationship responsibilities.

I’ll end with one of my favorite stories of courage to speak truth to someone in power, and by doing so perhaps provide a good idea for some frustrated executives out there. The VP of sales had been trying to make a significant point to the CEO who was not listening. Finally, in exasperation the VP brought in a bucket of sand and dumped it on the CEO’s desk. “What’s this?” the shocked CEO asked. “I thought that since you seem determined to stick your head in the sand I would make it easier for you,” said the VP. “I aim to please.” The message finally got through.