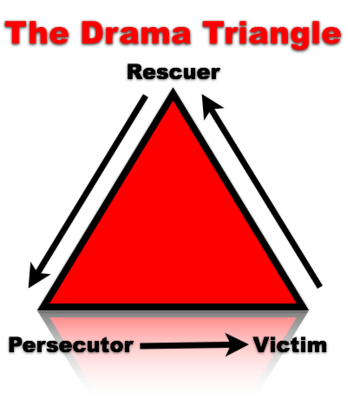 I’ve been there and maybe you have too — being held accountable for producing a result, then given people to work with who do not report to you. Hah! Good luck! In executive team building the drama triangle must be identified and squashed. Sometimes unwittingly the executive team and even a conscious leader can generate drama triangles.

How do you create a drama triangle? That is all too easy! Let some worker complain about someone who is telling them what to do. Be the “mama bear” or “papa bear” and ooh and aah over someone’s upset because their work wasn’t up to someone else’s standard, someone who didn’t appreciate them and their work. Let this victim drone on and on about how hard they worked — all weekend — and how important the work is to them, and how they aren’t appreciated. Let them whine, and give space for their upset. Whether you are their formal manager or an outsider with power, you are now playing the rescuer in the drama triangle.

But don’t get both sides of the story when you’re rescuing that poor victim. Don’t say, “You should be having this conversation with the person who is unhappy with your work product, not me.” Don’t ask them where their culpability in the situation is or was.

This drama triangle was called out by a psychiatrist named Stephen Karpman in the late 1960’s. It is sometimes called the victimhood triangle. It is the dynamic between the persecutor, the victim and the rescuer. What is interesting about this dynamic is that no matter where you START in the drama, you end up in the victim position. This first video is an excellent backgrounder to the work-related second video that applies the drama triangle to the poor bloke who was given responsibility but not authority, which means he becomes a sitting duck for being the persecutor to the people who don’t report to him but are supposed to support the expected outcome. Then there’s the interested third party who sympathizes with the victims who would rather make the darned persecutor wrong than buckle down and get to work — the one who is trying to produce some results around here is pegged the persecutor.

We sometimes act AS IF business occupies a higher realm where our humanity doesn’t show up, when in fact we do have our “best behavior” option available at all times.  Perhaps we are well-behaved at work, meaning we exhibit emotional intelligence most of the time at work.

Under stress however, we tend to react rather than respond and it is in these circumstances where the drama triangle can show up.  This video is an explanation of the “Dreaded Drama Triangle,” from a different view of it AND a solution for the workplace.

There you have it, the problem and the solution.  How easy is it to step out of the drama triangle and go back to work?  I would love to hear your stories!

Let me go back to the title and its implications that responsibility without authority feeds the Drama Triangle.  When a person who does have authority (of any kind) becomes the rescuer to a complainer (victim), the person who has responsibility but no authority will start out the persecutor and end up the victim.  In fact, according to Lynne Forrest, EVERY role in the drama triangle becomes a victim in the end — according to her these are the three faces of victim.

Overcome Your Resignation - Hire ‘A’ Players
Why Do A-Players Leave Voluntarily?
Right People in the Right Seats, Please