Some Kernels of Sage Advice for Building an Effective Team 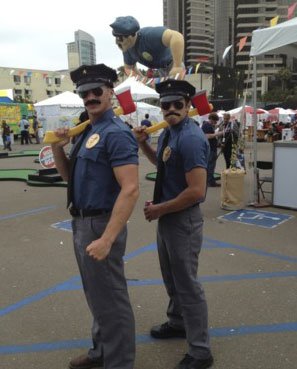 The importance of having a well-oiled, well-equipped and responsive team has been known and practiced for a long time. Great leaders in history such as Alexander the Great and Julius Caesar were able to conquer whole populations with their teams.

Certainly now, as then, the quality of a leader is the predominant driver of the effectiveness of those teams.  Or is it?  It might be worth some self-reflection to challenge your core assumptions regarding team leadership.

This picture is silly, but you get the idea — don’t be a blown-up image of authority, hovering over all and creating a bunch of mini-me’s.  That works for the comics, not real life.

In today’s world of business it is important to strengthen the links uniting you and your team if you are committed to being victorious in whatever endeavor because a leader without followers goes into battle alone.  Leaders earn followers.  So how do you garner their allegiance?  Can you demand it?  Probably not.  Should you expect it?  Yes, but you cannot assume it.

You need to establish a reliable climate of collaboration and perhaps some camaraderie between your colleagues and yourself.  Who better than you to organize a sports event or other friendly event to help them know each other better and to know you?  But this is a balancing act.  You want to garner their trust, and you must also have their respect. Too much friendliness may usurp your power to lead; too little and you may be seen as unapproachable.   As leader you also have to consider the best way of bringing your colleagues to trust you by asking yourself the right questions such as:

To know your colleagues is one thing but since it is also necessary for you to gain their respect, one simple way is to walk your talk.  Be an example of excellence.  Be willing to roll up your sleeves and do the dirty work.

A tried and true means to reach your team and garner their willingness to follow you is to demonstrate humility and integrity on a daily basis.  Simon Sinek says this very well in this video.

I once worked with a leader who knew his team was going to be expanding by almost triple their current size.  He asked me to work with the current team using the Harrison Assessment because he knew he would want his current team to assist him in assimilating the new team members.  So he wanted what he called his “core team” to be on their best game.  By providing some direct feedback followed by a team building event, their spirits were lifted and they were prepared to accept additional responsibility because they knew EXACTLY where they needed to work on their own issues, and they knew how to support fellow team members in raising their game.  During team building this leader was right in there, sharing his own vulnerabilities and simultaneously demonstrating leadership.

The best leaders are, above all else, committed and effective workers.  It is only by demonstrating good work that you can expect good work in return.

Additionally, be available to your people — not to take the monkey from their back onto yours, but show your interest in their work product.  When giving feedback, do it without depreciating their valuable contribution and do it as an instructor with their growth as your intention.

Dr. Ken Blanchard’s situational leadership model is a good example of how to model a desired behavior, then instruct it, then release responsibility and let someone else take charge of a project while looking on, then remaining available for feedback.  In the end, you should be able to turn that work over and expect that it will get done and done well.

That does not mean your team will do the work the way you would do it.  They might not.  You, as their leader, need to be committed to the RESULT, not to the PROCESS.

No team of people gets by without a little conflict now and then.  That conflict could be between themselves or with you. The emotionally mature way to handle any conflict is to be patient and to listen to every point of view, even to confer with your other colleagues if needed, so that your perspective is the most objective possible.

In nature, conflict is often life and death, here’s one very graphic example of teamwork in the wild (called the Battle at Krugar) and the observers are chatting away.  But watch it ALL the way through, it turns out o.k. in the end in that no animal was killed.

Communication is the glue.  For your team to be effective the communication has to be effective and particularly in your absence. You have to inspire your team to want to go further and to be successful no matter what happens. Value the work of your colleagues by congratulating them on their results and without blaming them when their objectives were not completely fulfilled. Invite them to express their opinion so they feel valued for their perspectives and contributions in the decision-making process.

A few last suggestions for full team engagement.  This is about your authenticity.  Be honest and humble with your colleagues.  Include them — let them know your plans and what you expect of them.  Do not hesitate to adjust your management style depending on the obstacles you encounter.  In the end they understand that you are human and that it is human to make mistakes as long as everyone is working to correct them, including you.

Thanks go to Kevan Clarenc for research contributions to this blog.  Kevan is studying in a Certificate Program in International Business Operations & Management at University of California at Irvine.  It is part of an MBA curriculum at Institut Superieur Europeen de Gestion in Paris.  Kevan is currently an intern for the summer at Accountability Pays.